A lot has happened this last month. I was involved in a nasty accident at New Jersey Motorsport Park during the 9th round of the MotoAmerica championship, and I’ve been in rough shape ever since. Luckily things are looking up, and I wanted to give you all an update.

I was going out for Sunday morning warm-up. My pace hadn’t been the best, but I loved riding the Honda and I knew that if we kept doing what we were doing, and being patient, my confidence would come back and results would start to show.

I had done two flying laps and I was already down to my best laptimes of the weekend. I was coming down the front straight, flat out in 6th gear when I reached for the brakes and nothing happened. My lever went straight to the bar and my bike kept going. I don’t remember anything after that.

I woke up late Monday morning in Atlantic City Regional Medical City Center. I had tubes down my throat and I quickly realized a machine was helping me breath. Jason (Pridmore) was holding my hand while my friends Nick and Elizabeth were sitting next to my bed. Tears began rolling down my face; I was so scared yet so happy to see them. I couldn’t speak so I signaled to Jason that I needed to write something. He gave me a pen and paper and I wrote, “I had no brakes”. I could see tears in Jason’s eyes, “we know” he told me.

I’ve seen riders lose their brakes before and the thought has crossed my mind – how would I react if it ever happened to me? Would I even be able to react? I came to find out that I did everything right. I would have cleaned out the rider in front of me if I had committed to the right-hander going into turn one. If I had gone straight still sitting on the bike when hitting the tire barrier and airfance, at that speed, I might not still be here. I knew I had to crash the bike to scrub off speed, so I hooked a left and crashed the bike on the grass before we both hit the tire wall.

My lungs were badly bruised and my head badly beaten. The paramedics on track was scared for internal bleeding and didn’t want to take any chances, a helicopter was called to transport me to the hospital.

I escaped without serious long-term injuries and I got released from the hospital Tuesday afternoon. Bruised lungs, a broken collarbone, two broken vertebrae and an overall beat up body were the verdict. Since I’ve got back to Norway, I’ve had an operation on my collarbone and it was discovered that I had a broken fibula just below my right knee.

I feel lucky and fortunate it wasn’t worse, but at the same time I feel like I have the worst possible luck. I’ve been involved in two big accidents since coming to America, and neither has been my fault. In 2013 I got hit from behind during a mass crash off the line at the AMA race at Road America, and this time it’s a human error that made it to where I had no brakes. Everyone that rides motorcycles knows there’s risks involved in what we do, but this stuff shouldn’t happen, and it’s been a rough few weeks both physically and mentally.

It’s not in my blood to give up, and I’ve been through too much to stop now. I still have goals I want to accomplish! While my body is healing my mind is already focusing on the 2018 season. I have no doubt I’m going to race motorcycles again, but this time it has to be under the right circumstances. A good team, great bike, solid economy and supportive people around me is all things I need to get sorted before I give myself 110% to racing next season.

There are a few special people that really went above and beyond in all of this. Nick and Elizabeth dropped everything and never left my side. They put their life on hold to help and support in every way they could and I couldn’t ask for better friends. Benny Solis, Senior and the whole H35 team visited me at the hospital every day and have checked up on me pretty much every day since. An amazing team with their heart in the right place and a team I’d be honored to ride for next year. Last but now least Jason Pridmore. This poor guy did not sign up to babysit a Norwegian midget that can’t seem to stay out of trouble. He is as solid as they come and I could never have made it through all of this without him.

Thank you fire and ambulance staff, the corner workers and medical staff at NJMP, Dr Rossi, the trauma staff at Atlantic City Regional Medical City Center and all of you who reached out with encouraging and supportive words, it means the world to me! 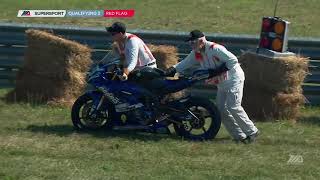 2019 season kicks off for Caroline